Menu
Log in
Register
Install the app
You are using an out of date browser. It may not display this or other websites correctly.
You should upgrade or use an alternative browser.

Here the last several months the wife and I have had to curtail our traveling and playing at casinos
We still receive a few offers now and then so try to take advantage
We were offered a room for one night and a few dollars to play on
Decided to make the drive up to the small casino near Grant ,Okla. and from there we would go to Shreveport where
we had another room offer plus a meal and the wife had a gift that was to be given out
We got lucky at the first machine we set down at and hit for 120.00 on a 1.50 bet third pull and then again for the 202 for a total of 354 in a free spin
We played from about 3 o clock Thursday afternoon until a little after midnight
We were down to 60.00 and called it a night.
I went back down around 9 fri morning and was able to get back up to roughly 147 to 150 and played about three hours
We left there and went to Shreveport and arrived about 4 in the afternoon .
Got our room and then got ready for the free meal
After that we went in and started playing again at this casino
Lady luck was with us both again .
On about the fourth pull on a 1.50 bet the wife hit for 97.00 then she puled the handle again and got a free game that paid us another 165 or so. Up and down and then another free game for another 130. She is now up to 340 plus
I put a 20 in the machine beside her and on the last pull hit a free game that paid me 187.00 I think it was
We cashed both machines out after a few more pulls and no hits
We played up and down on that then set down at a machine and put a 40.00 in it pulled it three times at 2.00 a pull and nothing so we dropped down to 1.50 and hit for 25 I think it was . She pulled a few more times and bam
hit the gold panthers for 32 free spins and this machine had the wilds also multiply in free spin mode
will show it as a comment .It was for 867.00 then hit for another 202 on first pull after free spin
This pic is the win at okla.

Here is our win at Louisiana for a little over 1000.00
We were playing at Boomtown and from what we can find out this is one of the best places for penny machines
We saw some big hits for 3000 or more on penny machines
One guy hot for 800 free spins on a game playing 80 cents a pull hit 400 free then on the first free spin it for 412 more cashed out a little more than 1200.00 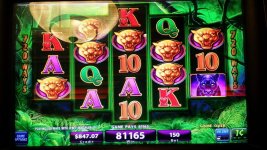 That is just awesome! I have seen those machines and some of them I have walked by and it says something like 900 more free games....Im like wth? Those China Shore slots I think they are called? seem to do that. I haven't played them, though my mom plays em. Wtg on those wins!

You are correct there are several machines like that
I hit on a china shore for 461 spins one night playing 2.25 a pull
Waite don each spin to play out . Took forever for all of them to play
The total of all the games was $ 3.14
I was so mad I could have torn that machine apart
I was stunned that it did not pay anything
For whatever reason I slapped the button one more time and it rolled up
a full screen of a symbol and popped up you are a jackpot winner 1200.00

Are you kidding 1800 spins? i have never seen that but i dont really watch other machines unless im playing them or my parents are. Dont you get a choice like free prize or free spins? Or is that just some of them? Have you ever taken the free prize? How much was it if you did it? Whenever I get free spins on other machines i know for me I constantly push a button so I don't have to wait for it to count up. My mom sits and wont touch a thing..it drives me nuts! .. I am just really impatient that way. Most people just sit and watch it count up.( like my mom) to me its like playing any slot at 3D in normal mode instead of turbo or watching paint dry.... wouldn't that just take hours to watch without touching the slot 1800 spins?

My fault it was 461 spins for a total of 3.14 cents after waiting on each and every spin
For some unknown reason I hit the button again as I have seen back to back free spins and it rolled up the 1200.00
I have watched people hit and take the prize and some do good
It will give you a min and max amount you will get say as little as 12.00 to as much as 1200 or anywhere in between
I have actually seen the spins pay more than the max and less than the min
Everyone will tell you the outcome is the same I do not buy that one bit. It is just another way to gamble
Yes the guy it for 461 spins and about 200 spins in he hit for another 461 after a few spins he hit for like 360 and then 200
I think as long as it is spinning I am saving money from sticking in another machine
Nearly every machine that we have played over the years our hits come within the first 10 pulls or mash of the button
Seldom have we had a big hit when we stay on it and run 100 or so thru
Seldom do we play max bet usually a coin or two under and at times even the minimum we can play and bet all lines

doc3738 said:
We played from about 3 o clock Thursday afternoon until a little after midnight
We were down to 60.00 and called it a night.
I went back down around 9 fri morning and was able to get back up to roughly 147 to 150 and played about three hours
http://forums.gonegambling.com/forums/attachment.php?attachmentid=79&d=1427090972&thumb=1&stc=1
Click to expand...

Hey doc, this is the sort of play I was referring to as far as getting everything for free. I don't know the casinos your going to but I do know that top vegas strip casinos have a very high criteria for getting comped. Meaning rfb ( room, food , beverage) plus transportation...airfare limo, etc. I have to think that the smaller Indian casinos the criteria has to be much lower so they can attract more people. Its all a mathmatical equation determined by coin in for slots and for cards its average bet size x hours. For what you were playing I hope you went to a host and asked them what you were entitled to for gas, air or whathave you. Back in the day I used to live at Caesers. I would go into the office and ask them for my airfare. Loved Caesers cause you didnt have to produce receipts. They would ask me what I paid for airfare. I learned to answer their question with a question of how much am I entitled to? They would give me an amount and of course my reply was oh good. Thats exactly what I paid for air. I was then directed to the cashier where I would pick up my cash. You need to find out what the casinos policy is for how long you gambled and if you did so at $1.50 a spin or more your coin in has to be pretty decent especially if your both doing that for 9 hours one day and another 3 hours out the door. You only stayed one night. You should be big enough with that kind of play over 11 hours to bypass the normal policies of getting your comps off the card and basically getting anything you want. Just saying.....

I'm in a slump, but it should turn around soon...I hope

Good luck to you all!

JSHOME
Hopefully it will turn around for you, as I have been there
The problem with me in a slump is I have a wife that is usually slumping as well and it takes a double bite out of us
Share:
Facebook Twitter Reddit Pinterest Tumblr WhatsApp Email Share Link
Top