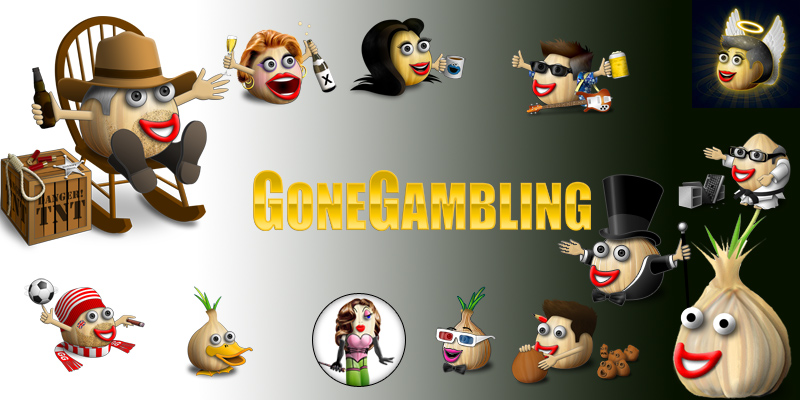 Way back in early 1998, John Abbott, a quirky Australian with a love of gambling started a website to help market his gambling systems. The site, ‘JT Systems Shop’ was really not much of anything, but it was just enough to catch the attention of an online casino who offered John a bit of cash in exchange for advertising their casino on John’s little site. It was that proposal that put the notion into John that perhaps there was something to this ‘Internet-thing.’

Once John realized there was money that could be made online, he set forth to create a new site—one where people could hang out and get to know each other, while playing a few goofy games and could also win some casino bonuses. It was the beginning of GoneGambling.

In its earliest form, GoneGambling was not a pretty website. It was rough around the edges, had only a few games, but what it did have was a steadily growing number of members and an owner who believed he could make the little site into something really special. He also had a wonderful programmer, Jeff (a fellow Aussie) who could help make John’s ideas come to life!

In mid-2000, John read a post by one of the GoneGambling members, about how this member had locked herself out of her house (in her bathrobe) and was caught ‘breaking in’ to her own

home by the police (with her naked behind hanging out the window!). It was that one silly post that began a back-and-forth dialogue between John and Greedygirl. After a couple months of this back and forth, John learned Greedygirl had a background in marketing and advertising and was also currently unemployed.

John offered Greedy a part-time job, which quickly turned full-time. Greedygirl was now in charge of handling all of the advertising and marketing needs of GoneGambling, allowing John and Jeff to work on creating an incredible site!

An Onion is born…

While the redesign was underway, John had a couple ideas for games he wanted to create—one was a slot game and one was a racing game. GoneGambling already had a horse racing game, so John wanted this new racing game to be a bit different. Jeff began building the structure for these games, and Chris set to work on the design…and an Onion was born!

It was this little bowl of fruits and veggies that brought GoneGambling our beloved Onions. The Onion Races were such a huge hit on the site, it was a no-brainer: Exploit the Onions!

In 2006, Greedygirl made the difficult decision to leave GoneGambling to pursue other opportunities in the online gambling industry. This left a vacancy for John to fill and his first choice was Trish, aka, LittleBit. Yes, John plucked another GoneGambling member to take over the position.

LittleBit had been a member for years with GoneGambling and also was very involved with the site’s Member Support. She really didn’t want to take Greedy’s former position, but John was not going to take no for an answer. John could be VERY persuasive when he wanted / needed to be!

LittleBit jumped right into things and the members absolutely adored her. John is known for being incredibly funny with a heart of gold, but he could also be a bit biting when he felt someone was trying to get over on him. Conversely, LittleBit had a special warmth about her which was a great balance to John’s personality – she was the ‘mom’ of GoneGambling.

US law changes plus other hurdles

In 2007, as a result of the U.S. passage of the Unlawful Internet Gambling Enforcement Act (UIGEA), GoneGambling saw its first big struggle. GoneGambling has always operated as a paid media model, rejecting affiliate (revenue-share) partnerships. With the UIGEA, many advertisers dropped paid media contracts, opting to rely solely on affiliate deals – which were not part of our advertising plan.

As time went on, the online gaming industry continued to change, making GoneGambling’s existence difficult to maintain. Making matters worse, John’s wife, affectionately known as ‘The Ball and Chain,’ developed cancer. John’s sole focus at this point was to help his wife beat the dread disease and to ensure his children (‘Rodent’ and ‘Precious’) were well-cared for.

While all this was going on, LittleBit was having health struggles of her own. Jeff began filling in a bit more, just to keep the site managed. It was clear, however, it was a very difficult time for the beloved GoneGambling.

A change in direction

In mid-2010, John realized his heart just wasn’t in GoneGambling anymore. LittleBit had decided she needed to look after her own health, so she let John know she would be leaving her position. With that, John set forth to find a buyer for the site. Just by sheer luck, Greedygirl heard about John’s interest in selling. She contacted her close friend, Bryan Bailey (better known as ‘Casinomeister’) to tell him about the news. Both the Casinomeister and GoneGambling sites started at about the same time and the two sites always had a close bond. After much consideration, Bryan decided he’d like to have a shot at bringing GoneGambling back to life and purchased the site.

Now Bryan already had his hands quite full managing his successful ‘Casinomeister’ website. GoneGambling requires quite a bit of attention and time. How would he be able to juggle the two sites?

Simple enough! While Greedygirl enjoyed her post-GoneGambling ventures, she always missed GoneGambling and its members. When the opportunity of coming back to GoneGambling came her way, she grabbed it!

John has passed the torch to Bryan, and went on to spend time with his family and work on other ventures. Members who were fortunate to be around during his years on the site will forever miss having him around and look forward to the moments when he’ll stop in to say ‘hi.’

Sadly, in February, 2011, LittleBit passed away. It was a difficult time for the members at GoneGambling – a testament to how very loved LittleBit was.

With her passing, GoneGambling now has its very own guardian angel.

By 2015, Bryan had done what he wanted to do with GoneGambling, and decided that the site needed the love and attention that it deserved, so he sold it to Greedy Girl. This was an amazing day in the history of online gambling. Greedygirl – who was the face and main persona of the site, was finally the mo-fo in change.

I sat down with Bryan Bailey, a few weeks ago and discussed the grim realities of GoneGambling. I was a blubbering, emotional idiot, because this was the first time I was actually speaking to anyone about how bad things had become.

Bryan, who has not only been one of my closest, most trusted friends for many years, has now earned the title of ‘SuperMeister.’ He immediately offered to buy the site back and the best bit with this, is that he has great visions for the future of the site. He also has the deep pockets and the best technical minds, so without question, Bryan can make this happen. GoneGambling will be completely rebuilt—using the most up-to-date servers, software and code. Bryan is keen to keep John Abbott’s roots in tact—with great games, humor and social interaction in mind. And the Onions??? The Onions will survive, as well.